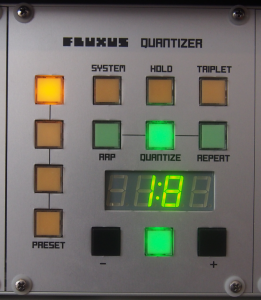 The Quantizer transforms incoming notes such that they fit to a rhythmic quantization raster. This quantization is shown on the display (here an eigth note). The quantization can be changed with buttons – and +. Pressing button Triplet changes the quantization to the corresponding triplet value. The green button right below the display changes its LED state on every quantization value (ON: first step, OFF: second step, ON: third…).

The Quantizer can work in three modes: Arp, Quantize and Repeat

When none of these buttons is activated (default), the Quantizer sends incoming note messages to the output as soon as they arrive. When Hold is activated, all keys that are pressed are sustained. When no more keys are pressed down, the sustained notes keep playing until the first new note is pressed down (which will end holding any previous notes and start a new set of notes being held).

Arp: a classic arpeggiator that sequentially plays all notes (with their velocity) in the order they have been pressed. In Hold mode, the arpeggiator always holds a complete „streak“ of notes in its memory: this streak starts with the first note that is pressed and ends with the last note that is released. So until there is at least one key pressed down, the streak is continued until no more notes are pressed at all. A streak can also contain several instances of the same note with different velocity and it is possible to record very long streaks (the Quantizer can hold many thousands of notes in its 1 Mbit memory and it is possible to switch between several arp sequences with the four presets)

Quantize: defers each incoming note message to the next quantization step

Preset: Select one of four presets. This affects the selected quantization, the mode and also the current note memory will be saved and restored in a preset.

Foot: selects the next preset

System: press this to enter system mode. When system mode is selected, the display will show a list of system parameters that can be edited. When the green button below the display is turned off, a parameter can be selected with the +/- buttons. In order to edit a parameter, press the green button. It will light up and the selected parameter’s value can now be edited. In order to finish editing, press the green button again and select another parameter. Press system again to return to normal operation. During system mode, the Quantizer does not output any notes but it will stay synchronized to an incoming clock.

The following system parameters are available:

System parameters will be permanently stored in the device and restored when the device is powered off and on again.